Artists live and create on this land and make their own platforms, many new human connections will be born. A big art event with creations by artists and local residents, “The 8th Nakanojo Biennale” will begin soon. 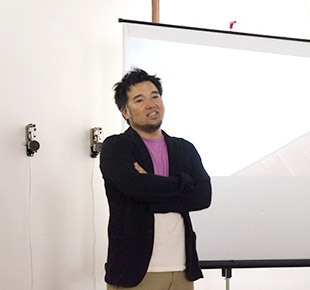 I would like to say thank you from the bottom of my heart to everyone who helped make the Nakanojo Biennale 2021 happen.

The 8th Nakanojo Biennale marks the 16th anniversary of my time in Nakanojo and a turning point in my life. It might be a short time when compared to cultural activities by local predecessors, but it has been a very important chapter of my life. I moved here with friends who shared similar ambitions and settled in a traditional house to learn mountain village culture. I got married and have been blessed with two children; this land certainly became our second home. Other artists who moved to Nakanojo because of the Biennale are living their life with this land. If I count the number of artists and local people who I have worked with it would easily be in the thousands, I've learnt a lot from exchanging opinions about the arts and the area with many people.

The environments that surround art; such as a museum, gallery or residency are changing everyday. Each one has its own role but I believe it's very important for artists themselves to make relationships with locals and visitors, just like the Nakanojo Biennale does. To exhibit at places which aren't made for art has potential problems, and each artist has to solve these problems by themselves as they carry on with their work. Artists create their works with a different point of view in the process of building a relationship with the location and locals. This brings new discoveries and offers change for both the audience and the artist, therefore a work would be specific to it’s location and will give you a different impression on every viewing.

As time passes, the role Nakanojo Biennale plays has changed. At the very beginning we made an exhibition with friends and word spread like ripples in water, I hoped the exhibition would be made by a big circle of artists themselves, not with curators or gallerists. Because I knew so many artists from my generation, who exhibit mainly at publicly sponsored exhibitions and felt suffocated by the traditional art world, we started various projects such as: group exhibitions, curators exhibitions, architecture exhibition and educational projects with universities; We made a foundation for different fields of artists to interact. Nakanojo Biennale also became the reason for many artists who met here to hold their own exhibitions all over the country. Now more and more artists stay, not only at the residency but also at venue owners houses, or have moved into empty houses. The whole town seems to have become more and more receptive to the art festival with each iteration.

In 1995 Kohei Oguri filmed “Nemuru Otoko” at Isama studio and in 1998 Reiji Hiramatsu opened Azuma art school at the Arikasa mountain villa, then in 2006 I started Nakanojo Biennale with friends from a base at Isama studio. I certainly feel this sequence of art and cultural activities has taken its root in this town. Above all, it's significant that Nakanojo has been receptive to films and art for 20 years, as it were, the whole town has been a continuing artist in residence for this time. I feel proud that I witnessed new art and culture being born and developing in areas with declining population.

I would like to trust in this land and people and continue together.

Since 2007 Nakanojo Biennale has been encouraging cultural exchange between locals and artists, including international artists. Many artists have participated in traditional events or exchanged food cultures and I often hear they maintain a relationship as if they were family. Above all, I'm very happy the area has been so receptive and it seems like everyone is enjoying themselves.
Foreign artists have also moved to Nakanojo and it is giving more opportunities for people who live in mountain villages to interact with different cultures. It teaches us how we don't realise our unique local culture unless it's seen from an others perspective. Thus international art cultural exchanges play an important role in learning about our own culture. 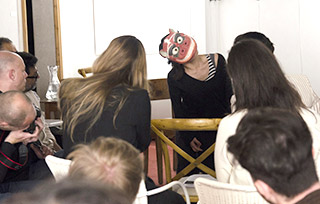 At Pavilion Zero, which took place at Venezia Biennale 2013, we were given an opportunity to screen a film which shows how Nakanojo approaches art; Also Masumi Saito (based in London) presented a performance inspired by the traditional dance form Shishi-Mai(Lion dance). From this experience I realised again how beautiful the culture from Nakanoyo is and I found it necessary to protect and share this culture with many others. 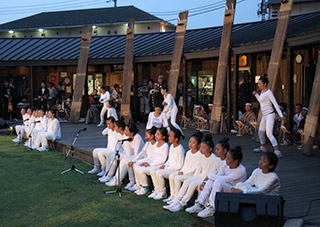 Each time at the opening ceremony of Nakanojo Biennale we make a platform for local people and artists to collaborate. Performers are mainly local children and the music is played by local people who support the traditional music culture Gakudan (orchestra).
They collaborate in completely different genres such as Jazz and Gagaku (ancient court music), contemporary dance and Kagura (sacred dance).Participants enjoy more than the audience and make theatre together.This is a very fascinating approach, we carry on our traditions and the collaboration between local people and internationally acclaimed artists allows us all to discover new art forms.

Nowadays there is a trend that culture is originating in rural areas instead of cities, which are loosing their character, and many tourists are visiting to take advantage of this. I would like to shine a spotlight on local festivals and unknown customs which have roots in local people's lives, and to introduce more of the beautiful culture which has been passed on by many generations, not only the tourist spots like nature and hot springs.

I hope the local area will be full of pride and Nakanojo's original culture will be passed on to the next generation because of the art and culture international exchange program.

Open Days of the art festival:

Nakanojo Biennale started in 2007 and this art festival marks it’s 8th year. Everywhere in town, including nearby onsen towns and abandoned wooden school buildings, will host exhibitions of drawings, sculptures, photographs and installations from more than 150 artists. There will be opening and closing events, theatre and performances as well as workshops and a market.